Recipe for disaster: a Bald Eagle, wind turbines and an incredibly incurious press.

Whenever I’m away for a bit, I often find it difficult choosing a topic to help me get back into the swing of things.  This time however, thanks to the sharp eye and superb photography of Ms. Jamie Riggleman, the choice was obvious.

Regular readers know I try to focus on items which are ignored by our local papers.  And, while the Mineral County (WV) News Tribune did carry one of Ms. Riggleman’s photos in a May 3 article, “‘That’s my fish!’ T-ball players get surprise during game,” it seemed to me a larger point was missed by the paper – the impact the planned Pinnacle Wind farm will have on Bald Eagles.

First, let’s have a peek at Ms. Riggleman’s excellent photographs, which were taken a week or so ago at Keyser’s (West Virginia) South End sports complex, some 2.3 miles from the Pinnacle wind project.  I included three simulated views of the turbines which the Bald Eagle might see from the sports complex, if looking toward the Allegheny Front which they are known to soar above.  More detail about these simulation photos below:

The three visual stimulation “photos” which I added to Ms. Riggleman’s slides above and detailed below, are offered for public view by the Pinnacle project developer, US WindForce.

This view superimposes turbines on a photograph taken from the area where Ms. Riggleman’s Bald Eagle was … well … fishing: 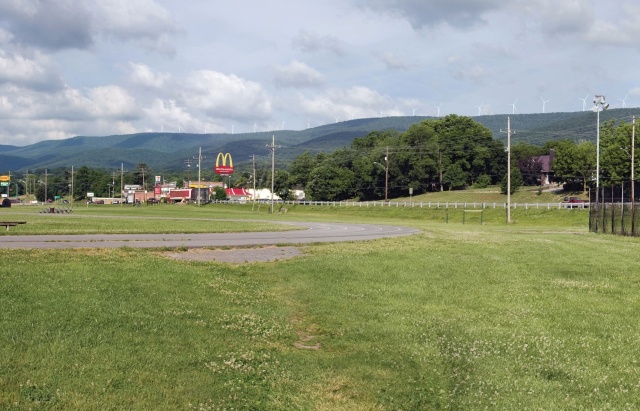 This simulation utilizes Google Earth for the visual from the same position: 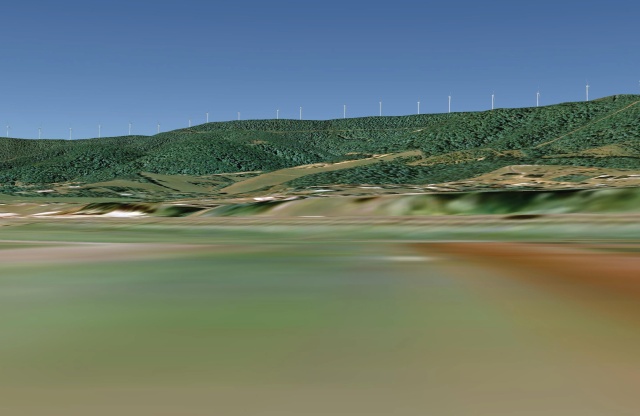 Now, for any of you folks from the local area wondering how it is that the size of the “simulated” Pinnacle turbines from 2.5 miles away appear to be similar in size to those in actual view from the Mt. Storm project when seen some 12 miles away from Keyser … well, we wonder the same thing.  Remember that these turbines will be some 450 ft. tall.  We have a feeling that the simulated photos just don’t do justice to the proportion of items in the distance.  Case in point, the real McDonald’s sign looks a lot larger than the photo arches when you’re actually at the sports complex.  Plus, the Pinnacle tower, which is visible from this location even though it is much smaller than the turbines, cannot be seen.

Anyway, in order to show you a better “view” of the proposed turbines against a slightly darker sky, we slid over to the simulation offered near Bogg’s Supply, just down the road from Ms. Riggleman’s Bald Eagle sighting and a similar 2.5 miles away from the turbines.  Here’s that “view” utilizing Google Earth.

So, why do I have my shorts all in a knot, anyway?

Well, it bothers me that the developer seems to have no interest in the fact that Bald Eagles are in close proximity to the turbines.  The WV Department of Natural Resources and the US Fish and Wildlife Service have both expressed concerns about the Pinnacle project’s impact on wildlife, however US WindForce appears to have no interest in their concerns.  Reportedly, during the January 2011 Community Advisory Meeting, David Friend was asked if Edison Mission or US Wind Force, LLC will secure an Incidental Take Permit for the Pinnacle Project. Word has it that Mr. Friend’s response was NO, because, presumably, he doesn’t think an incidental take permit under the Endangered Species Act is required or necessary.

This is, in my humble opinion, a risky and, quite frankly, cavalier position for the developer to take in this matter, since a representative of the USFWS told a gathering recently that “even though our guidelines are currently voluntary, and even if the final guidelines become voluntary too, there’s still this whole issue that the Migratory Bird Treaty Act and the Bald and Golden Eagle Protection Act aren’t wishy-washy – those are laws,” and that, “If take occurs and you do not have a permit for take, including disturbance, you’re in criminal liability and potential criminal culpability.”

If I was sitting in the home office of Edison Mission I’d be asking a question or two of Mr. Friend.  After all, it is Edison’s money and reputation on the line.  Of course, that assumes Edison Mission actually cares.

But don’t you really wonder why the folks at the News Tribune, when publishing the Bald Eagle photo story, didn’t pick up on the fact that wind turbines, which are known threats to Eagles, are so close to the flight path of this beautiful bird?  It doesn’t seem to me a Pulitzer is required to connect the dots between this Bald Eagle and the meat grinder just 2.3 miles away!  Is the local press really that incredibly incurious, or is this simply another yard of fabric stitched to the long red carpet which has been laid before the wind developer from the beginning?

I don’t know … but I do know this.  If you happen to be the unlucky soul who finds and keeps a feather from Ms. Riggleman’s Bald Eagle after it meets the blade of this under-performing, heavily subsidized row of ridge topping propellers, you’ll be fined or perhaps even end up in the clink.

You see, the Bald and Golden Eagle Protection Act (16 U.S.C. 668-668c), enacted in 1940, and amended several times since then, prohibits anyone, without a permit issued by the Secretary of the Interior, from “taking” bald eagles, including their parts, nests, or eggs. The Act provides criminal penalties for persons who “take, possess, sell, purchase, barter, offer to sell, purchase or barter, transport, export or import, at any time or any manner, any bald eagle … [or any golden eagle], alive or dead, or any part, nest, or egg thereof.” The Act defines “take” as “pursue, shoot, shoot at, poison, wound, kill, capture, trap, collect, molest or disturb.”

In addition to immediate impacts, this definition also covers impacts that result from human-induced alterations initiated around a previously used nest site during a time when eagles are not present, if, upon the eagle’s return, such alterations agitate or bother an eagle to a degree that interferes with or interrupts normal breeding, feeding, or sheltering habits, and causes injury, death or nest abandonment.

Now, maybe it’s just me, but I have to believe that carving out acres of ridgeline and placing 23-747 size propellers in the flight path of these birds is a little more serious than sticking a feather in your pocket.

And what happens if the act is violated?  A violation of the Act can result in a fine of $100,000 ($200,000 for organizations), imprisonment for one year, or both, for a first offense. Penalties increase substantially for additional offenses, and a second violation of this Act is a felony.

(A copy of the Bald and Golden Eagle Protection Act is available at: http://permits.fws.gov/ltr/ltr.shtml.)

Bottom line:  “Anyone who possesses an eagle feather, and doesn’t meet the requirements, could face fines up to $100,000 and a year in prison. A second offense is upgraded from a misdemeanor to a felony, and carries a maximum penalty of two years in prison and a $250,000 fine. The act also provides for a civil penalty of up to $5,000.”

AND THAT’S JUST FOR KEEPING A FEATHER FOLKS!

Now you might see why I feel Ms. Riggleman’s photo’s are so extremely important.  I just wish our local news folks saw more in her photos than an opportunity for a catchy little article and actually asked the hard questions of US WindForce.

Well, one could always hope!

AT Note:  We thank Ms. Riggleman for her generosity in sharing the beautiful photographs she took of this noble bird.

4 Responses to Recipe for disaster: a Bald Eagle, wind turbines and an incredibly incurious press.