Until today, the image used to represent Allegheny Treasures was a personal photograph of Green Mountain, above Keyser, West Virginia, as seen from my home.  When taken a year ago, the 23 massive wind turbines of the Pinnacle wind project had not yet consumed the ridge-line and the sky above it.  In explaining that the old photo no longer represents the view of the mountain, now littered with the turbines, I won’t waste a lot of your time telling personal stories of my adventures on the mountain as a youngster or wail away at the recent destruction.

Instead, I’d rather readers, not already familiar with Allegheny Treasures, take the time to read the many articles posted here and the many sources which I’ve linked to help you better understand the industrial wind business.

That being said, I find it incredible that some folks feel these massive metal contraptions actually improve the view nature provides.  As example, back when Pinnacle’s developers were seeking approval for the project, a local reporter published these comments: “I never found them (windmills) discordant to sacred ground, rather, complementary. A nice, man-made touch.”  If that weren’t enough, he then lamented the absence of wind turbines as he viewed nearby “Big Savage” mountain from various roadside stops saying, “None of those views take in windmills. I hope someday they do…”  (Oh! Where to begin!)

Further, the incredibly silly position often taken by “well-meaning” environmental groups that critical and delicate habitat must be sacrificed in order to actually save it, fails every test.  Industrial wind’s claims (emission reduction, reliable/cheap/on-demand electricity and other wind promoting “energy of the future” nonsense) are supported primarily with wouldas, shouldas and couldas.  While I suspect the wind folks will fire back with the same tired links and boilerplate replies, little factual evidence will be provided to support their outlandish claims.  You know the measures I’m speaking of … actual performance statistics – date and time of electricity generation … the things for which we might be willing to sacrifice a bit of our environment, in order to achieve.

In Mineral County, almost from the time the wind developer rolled in, it seemed our fate was sealed.  Masked as a revenue generator and job creator, the Pinnacle wind project was welcomed with open arms by our willingly uninformed officials and an incredibly incurious press.  The result – the Pinnacle turbines, we are told, will become fully operational by the end of this year.  Sadly, negatives associated with quality of life issues, in which local officials and the local press seemed to have little interest early on, are already having a horrible impact on residents.

To put salt on the wound, the anticipated contribution from these energy impostors will mean little to a power network having no real requirement for the occasional and random electricity generated by Pinnacle’s 23 Japanese-made turbines sitting upon the massive Mexican-made towers.  Early testimony before the WV Supreme Court of Appeals some two years ago suggested that existing power plants have the capacity to satisfy present and foreseeable electricity needs, without the addition of wind energy.

But back to the purpose of this post.  In order to find an appropriate photo to grace Allegheny Treasures which represents the natural beauty of this region (without turbines), I had to travel a few miles from my home along US Route 50.  The photo is of Saddle Mountain, near the birthplace of Nancy Hanks, the Mother of Abraham Lincoln.

So far, the wind profiteers haven’t been successful topping this section of the Alleghenies with their wind turbines.  But it’s not for lack of trying.

Oh, in case you want to see my full Saddle Mountain photo, it’s here for your enjoyment: 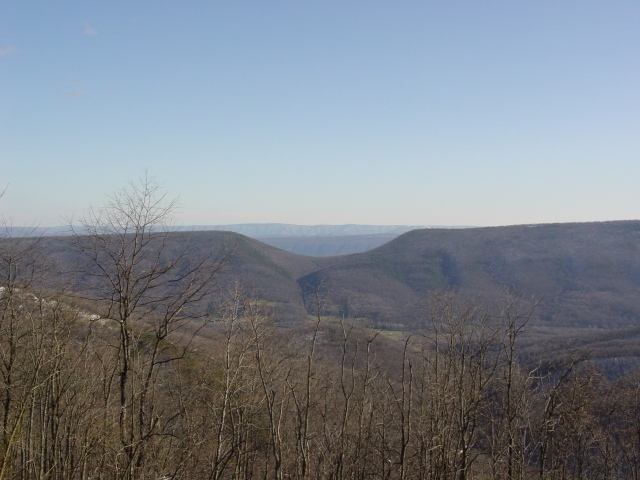 Pretty, don’t you think?  Will it remain this way?  That’s pretty much up to you!  All I can tell you is … don’t be lulled to sleep!  If we leave it to our local reporter and like-minded individuals, the profit driven wind developers will take the land and, next thing you know … I’ll be replacing this Saddle Mountain photo with another, more distant view.

Or worse, no photo at all!