West Virginia Physician Dr. Wayne Spiggle recently received an email from Secretary of the Interior Ken Salazar in which the Secretary announced that the Department of the Interior will issue a 50-state report outlining the country’s most promising ways to reconnect Americans with the natural world.  The email noted two projects in West Virginia that will be included in the final report (specifically, landscape conservation in the Canaan Valley and a partnership with the Boy Scouts to improve trails and other recreational facilities in the New River Gorge) each said to represent what the State of West Virginia and local stakeholders believe are among the best investments to support a healthy, active population, conserve wildlife and working lands, and create travel, tourism and outdoor recreation jobs across the country.

Taking advantage of Secretary Salazar’s suggestion that the Interior Department listens to the people of West Virginia and communities across America, Dr. Spiggle offers his thoughts in this open letter to the Secretary:

To the Office of Secretary Salazar, U.S. Department of the Interior:

I just read with great satisfaction Secretary Salazar’s announcement of his plan to promote outdoor recreation and conservation in WV.  During my last three years of high school I grew up in Canaan Valley.  Later, I helped fight for its designation as a U.S. Wildlife Refuge and I’m delighted that outdoor recreation and conservation will be enhanced there.  Likewise, I have friends who live near the New River Gorge.  This area is in some turmoil between the urge to sell land to developers and to find ways to protect and conserve the extraordinary environmental assets they now possess.  This program will be a great help to them and to West Virginia.

But, I have a major concern. Over the last few years, I’m seeing a transformation along West Virginia, Maryland and Pennsylvania vistas that has prompted me to study industrial wind.  This is what I’ve found:

1. The USFWS and the WVDNR are very concerned about the cumulative adverse effects on the environment of industrial turbine installations along what is often called the Allegheny Front, a narrow but critical migratory pathway for the nation’s song birds and raptors.  This area is also habitat for bat populations now known to be essential to agriculture.

2.  Two weeks ago, at the Laurel Mountain industrial wind facility  wind facility near Elkins WV, there was a major nighttime bird kill, allegedly involving 500 – 600 Black Poll Warblers.  They were on their way to winter in South America.  The survivors will return by the same route this spring.  At this date, no reporting has been done on this event.  In fact, it is a general rule in WV that industrial wind installations are not required to report adverse episodes after one year.  The facility in question has been operating for about two months.

3.  While many environmental organizations think that big wind might be helpful to combat global warming, none favor placing turbine installations in critical ecological regions, including the essential corridors of Appalachia.

4.  To worsen matters, the U.S. Forest Service is now considering allowing turbines in the George Washington National Forest.  This appears to contradict the Secretary’s intentions.

5.  Compared to the west, Appalachian wind is not good for industrial electricity generation.  Our grid, the PJM, has performed summertime studies of Appalachian turbine installations and has rated them at 13% efficiency referenced to their rated capacity.

6.  The cost of installation is being borne by the U.S. public, way out of proportion to other energy sources, with the exceptions of solar and clean coal.   The industrial wind energy industry could not exist without these budget-busting subsidies. This cost is rapidly increasing.  Somewhere there has to be a tipping point for U.S. taxpayers.  A sixty-five percent public contribution to big wind’s capital costs means the public pays for installing wind facilities but the equity and profit goes to the developer.

7.  Cash grants through the 1603 Grant in Lieu of Taxes Program is particularly disturbing because of its rapid growth and the fact that much of this money is going to foreign companies.

Based on the above, my petition is three-fold:

1.  The Secretary should assess critical areas that should be protected from industrial development harmful to the ecology and advocate for federal law to protect such areas. Otherwise, in my neck of the woods, his recreation and conservation program will be significantly forfeited.

2.  The Secretary should issue a moratorium on deep shale gas extraction and industrial wind facilities on all federal land until trustworthy site-specific environmental impact studies assure the lack of adverse impact.

3.  Since the federal government has a lawful interest in migratory song birds and raptors, Secretary Salazar should advocate rules or law that requires industrial wind facilities to report promptly any and all episodes of wildlife mortality associated with their operation.  Otherwise, the American public will never know the extent or consequences of these occurrences.

In a related issue, Allegheny Treasures finds it interesting that the Interior department utilizes this photo for their email banner, presumably to represent their image of “the beauty … of our land.”

We find the Interior Department photo eerily similar to our own Allegheny Treasures banner (below for your convenience) which is a photo I took of the Allegheny Front above Keyser, WV nearly a year ago, along the very flyway Dr. Spiggle discusses in his letter.

Now compare our Allegheny Front banner photo of last year to the photo I took this morning of the very same Allegheny Front ridge-line, which is now home to 23 massive Japanese wind turbines standing tall on their Mexican made columns. 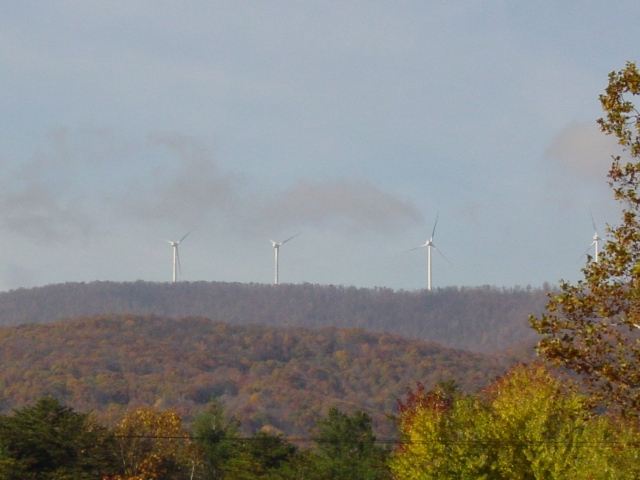 As you can see, Secretary Salazar’s vigorous promotion of industrial wind will, in reality, do little to preserve the beauty of the landscape.  Unfortunately, the Secretary’s misguided efforts to support this energy impostor is more likely result in this sad scenario:

We thank Dr. Spiggle for allowing us to post his letter to the Secretary.